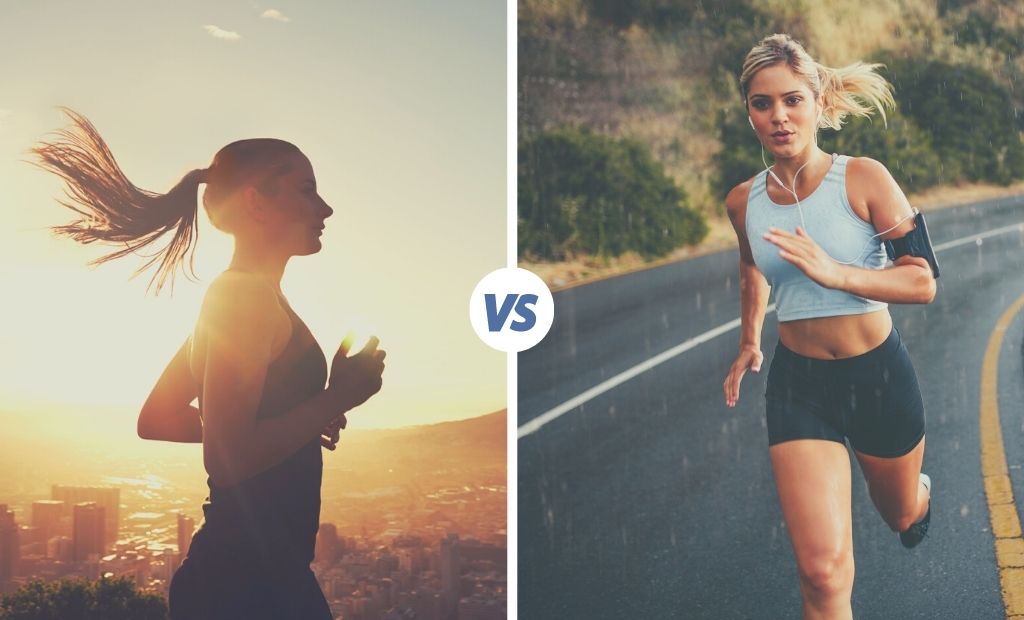 Driving around town, hiking in the park… almost everywhere I look, it’s rare if I don’t see someone either jogging or running. If you have a membership at a local gym, you definitely see people jogging or running on a treadmill or possibly on an indoor track. Perhaps this daily reminder of its allure has inspired you to take up jogging or running?

What are the differences between jogging vs running? Maybe you’re wondering which would deliver the best health benefits, based on your age and fitness level.  So, today, let’s discuss some pros and cons of both.

A Definition of Jogging and Running

Jogging is defined as a form of trotting or running at a slow and leisurely pace. The intention is to increase one’s physical fitness while putting less stress on the participant’s body than they’d normally experience from doing faster running, but with more speed than walking.

Running is defined as a method of movement in an exercise setting in which both feet at times have left contact with the ground. It is similar to jogging, but at a faster pace and it is more taxing on the body and muscles.

People who engage in running regularly tend to have better overall fitness and an increased life expectancy. Running is harder on the body than jogging and recovery times can take longer, but strength, speed, and cardiovascular health can be greater for a runner than for a jogger.

To Sum Up the Pros and Cons:

In the infographic below, let’s briefly sum up the Pros and Cons of both jogging and running.

How To Decide Between Jogging and Running

If you’ve narrowed down your choice of preferred exercise to jogging and running, hopefully, you now have some information that will help make the choice easier. While you can engage in both activities, most will find it beneficial to focus on one of the two. Much of the decision should be based on a number of factors.

You should consider taking up jogging if:

You should consider participating in running if:

Final Thoughts on Jogging vs Running:

Both jogging and running can provide amazing health benefits and be quite enjoyable for their participants. Knowing the main differences between the two, and determining which is a better fit for you, will make either activity more rewarding and fun.

Taking into consideration your health, fitness levels, exercise goals, and other logistics will make it easier for you to choose which will be a better fit. I suggest giving both a try, if physically able, to see how you feel about these wonderful activities! And take a partner with you, if able. This will keep you accountable and is a great way to pass the time on longer outings!